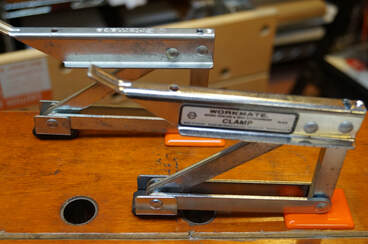 The Gripmate Clamp 79-011 was one of the four original accessories that Black & Decker developed for the Workmate. It was introduced in early 1978 at $4.99 apiece (increased to $5.99 by mid-1979). It is a hold-down clamp, performing the same function as a holdfast in traditional woodworking, but with a pivot-and-lever mechanism that eliminates the need to bash it with a mallet. Black & Decker literature described it as follows:
"Fits into Workmate, clamps parts for gluing and holds items for sawing, drilling, sanding, routing on a horizontal surface. Adjustable up to 3-3/4". Rotates full 360 degrees. Has up to 100 lbs. clamping force. Non-marring." (Note: the instruction manual claims "150 lbs. force".)

The Gripmates were made in Canada, and they were sold singly. The name "Gripmate" and the B&D hexagon logo were embossed in the top metal surface of the clamp. They came in a box with simple black and white printing and line drawings on white cardboard.

To use a Gripmate requires inserting a plastic adaptor bushing into one of the holes in the Workmate jaws and then inserting the Gripmate into the bushing. The manual recommends that you "use the centre double-thickness portion of the Workmate vise jaws" and "avoid using the extreme end holes". The need for the bushing has been a bit problematic, because many owners found it difficult to keep the Gripmate and the bushing together when they were not in use on the Workmate. As a result, used Gripmates often show up for sale without the bushing, which makes them useless unless you can fabricate a substitute.

The original Gripmate was supplied with two different sizes of plastic adaptor bushings.. Both bushings have "GRIPMATE" and "Black & Decker" embossed on their top surface. The 3/4" black one for the Workmate 79-001 Type 1 was embossed ".75" and "3" on its bottom surface. The 20mm orange one for all other Workmates was embossed "20 mm" and "7" on its bottom surface.
After a very short time, they dropped the black 3/4" adapter bushing as a standard part of the 79-011, changing the instruction manual to advise owners of the Type 1 Workmate to contact their dealer for the right part.

Next, for some strange reason, they changed the part number to 79-016. They still called it the Gripmate, they were still made in Canada, and there was no change in the construction of it. The only difference was that they were now sold in pairs. The box also changed, with a glossy finish and full color photographs.

Other changes were made somewhere in this period; I'm not sure of the exact sequence. They eliminated the embossed "Gripmate" in the metal surface, instead using a glossy black-and-white label applied to the side of the clamp, displaying the model number (now 79-016) on the clamp for the first time, The adaptor bushings were modified to add tabs at the bottom of the post to lock them into the Workmate jaw. "20 mm" was embossed on one side of the post, and "4" on the other side. The embossed text was eliminated from the top surface of the adaptor bushings. The bottom corners of the metal post for the Gripmate itself were chamfered to make it go into the bushing a little more smoothly.

The last change I know of during this period happened some time around 1990 or so. They dropped the name Gripmate on the clamp, and in the instruction manual. The new moniker was the much-less-appealing "Workmate Portable Work Center & Vise Attachment Clamp", which now appeared on the glossy black-and-white label applied to the side of the clamp. For some odd reason, the box continued to use the name "Gripmate", and I'm not sure if that eventually changed or not. Perhaps they had an excess inventory of boxes and didn't want to waste them.